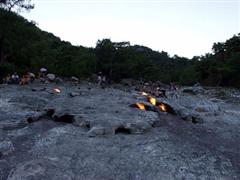 Chimera is far from 600 m to Cirali beach and high 250 m above the sea level in an amazing natural wonder.Chimera is an open rocky area with never extinguishes fire in the forest.Authors have mentioned about these mysterious flames since 4 B.C.The ruins which are located near the fire area belong to the ancient Byzantine Church.The oldest building is located in the region,that is a temple dedicated to Hephaistos.Today,little remains of this structure has found.Large quantites of methane gases have been identified as a result of analysis.The best way to enjoy the mysterious flames should be at night.However,you need a flashlight until reaching to the flames in this adventurous journey.

The names of Chimera passes in the Bellerophan and Chimera legends.Korith prince Bellerophon is claimed to be an affair with wife of the King of Argas Proitos.Upon this,the king of Argos sends a message about a secret to kill the princes by the King of the Lycia,Lobates.Lobates gives the task of killing about ''Monster Chimera'' that has lion head,goat body,serpent tail with breathing fire.

Bellerophon catches the flying horse Pegasus by the help Goddess Athena.He shoots the Chimera's mouth with a speartripped lead.Then,the lead melt in the mouth of Chimera and kills the monster.Lobates orders to Bellerophon,who was succeeded the first task, to fight with warrior Solymi tribe as a second task.Bellerophpn ambushed most courageous soldiers in the way back to the Lycia but it also manages to go right into Lycia as a hero.Lobates honors Bellerophore by giving one of her daughter and half of the kingdom.

Another version of the legend tells about Bellerophone flys with Pegasus until the gates of heaven and it takes over him in front of the door.Bellerophone falls to the earth and begins to wander the earth alone because of the gods do not help him.